Campaign for a Progressive Santa Barbara Kickoff and Canvass 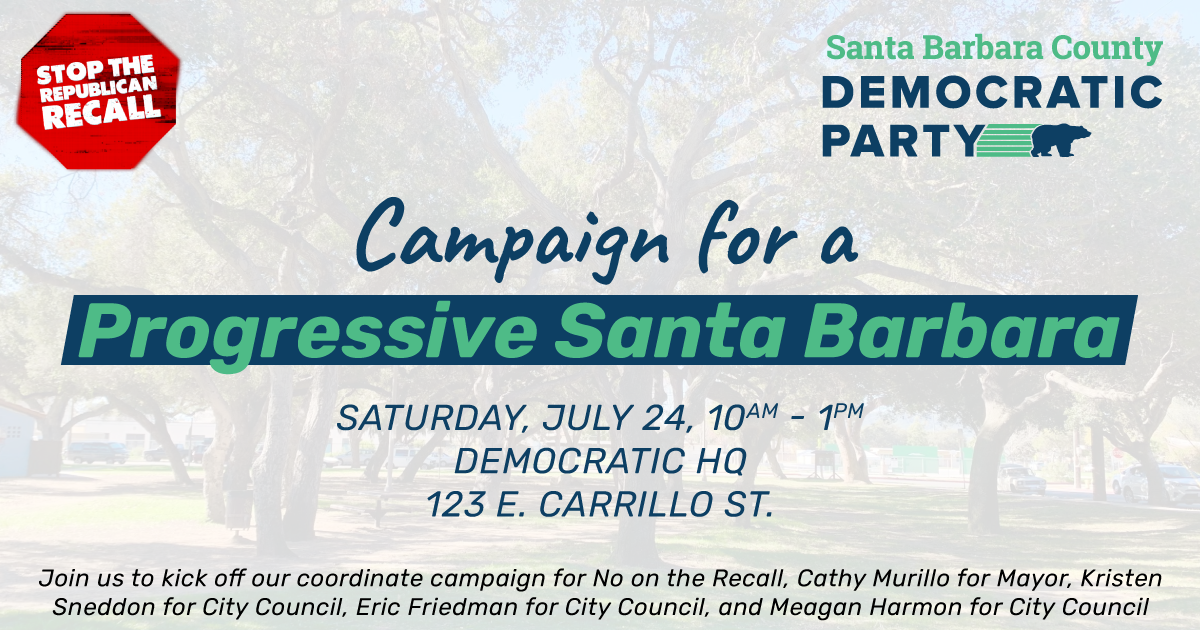 This Saturday, July 24 at 10AM we will be joined by Mayor Cathy Murillo, and Councilmembers Kristen Sneddon, Eric Friedman, and Meagan Harmon to kickoff our campaign for a progressive Santa Barbara!

We are campaigning for TWO very important elections: the Mayor and City Council elections, as well as the Republican Recall campaign of Governor Gavin Newsom. Voting in the recall campaign begins in less than one month, on August 16 when every voter will receive a vote-by-mail ballot.

If you’re not familiar with this recall election, you’re not alone. The Republican Party is attempting to remove Governor Newsom from office and replace him with a conservative Republican in an unusual special election, and they are counting on low turnout among Democrats, Independents, and progressives to pull off their scheme. As we saw on January 6, right wing Republicans will do whatever it takes to overturn the results of free and fair elections. We must call their effort what it is: a partisan power grab in our nation’s bluest state.

Despite facing an unprecedented series of crises, including a global pandemic, devastating wildfires, and economic hardship, Governor Newsom has met challenges head on: taking on the fossil fuel industry to fight climate change, providing tax relief and stimulus checks for working families, and investing in education to allow our schools to reopen.

But that’s not all that’s at stake. Mayor Cathy Murillo and Councilmembers Kristen Sneddon, Eric Friedman, and Meagan Harmon have worked diligently to fight for tenants’ rights, implement humane solutions to homelessness, and create good-paying union jobs in our community.

Our campaign for a progressive Santa Barbara is about standing up for our shared values: environmental sustainability, supporting working families, and strengthening our democracy.